How to export editable PowerPoint charts

Displayr allows the user to quickly create charts and visualizations before exporting them to PowerPoint.

Before creating a chart you will first have to create a table. To do so you can either drag and drop a variable on to a page or select Insert > Enter Table and select the variable from the Data Source > Variables in `Data` menu.

To change the table to a chart select the table and go to Inputs > OUTPUTS > Chart.

By default, charts and visualizations are exported as images. To change this go to Properties > PowerPoint export > Format > Microsoft Chart.

By default, Displayr will export to a similar chart type in PowerPoint (if it exists). However, you can override this by selecting additional chart types from Export as.

Where there is no matching chart in PowerPoint (e.g. Grid of Bar Chart) Displayr exports a similar editable chart instead. When Displayr can't identify a similar chart type it exports an output as a bar chart.

It's not always possible to exactly recreate a chart created in Displayr in PowerPoint. Displayr aims to match and recreate colors, borders, line types, font families & size, axis contents and grid lines. Exporting works on best effort basis. When an exact replica of the output created in Displayr is required but can't be achieved it's recommended to export the output as a picture.

You can add your own custom chart templates by creating Chart Templates in PowerPoint (or any Microsoft Office application) and uploading them to your Displayr Cloud Drive. You will need to have the chart template file (*.crtx) saved somewhere in preparation.

Displayr allows you to export selected pages only or all pages. To export a chart to PowerPoint select Export > PowerPoint. Choose which pages you wish to export and select Create new document. 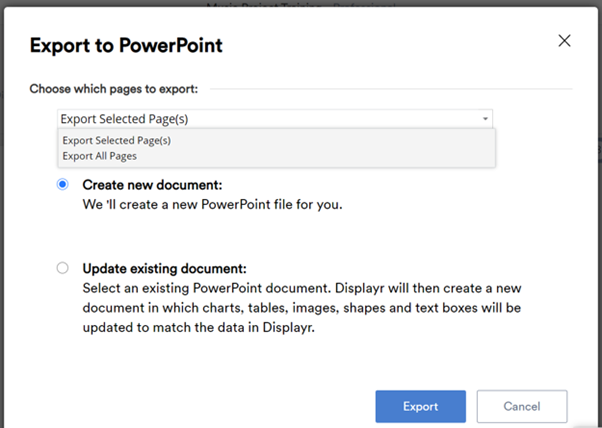 To find out how to update a pre-existing chart and PowerPoint documents see Update Existing Document. 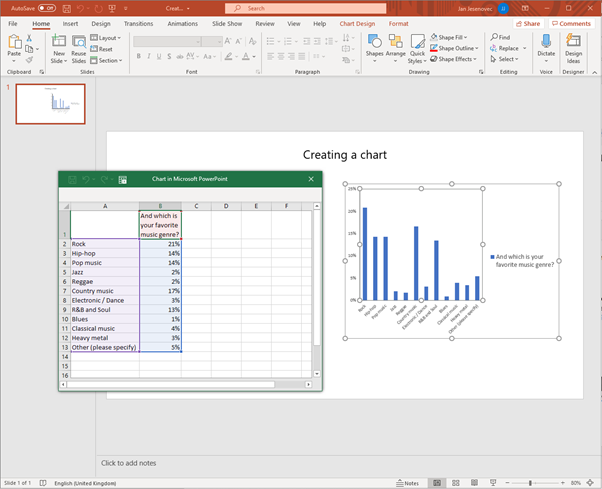 Current limitations to updating/exporting a Displayr chart/ Visualization to PowerPoint

When exporting charts as MS graphs to PowerPoint, although we try our best to make the charts resemble how they look on a Displayr Dashboard, there are some limitations. Below is a list of known limitations for when we export charts from Displayr to PowerPoint.