An information criterion is a measure of the quality of a statistical model. It takes into account:

The following table shows the relationship between age and gender and and answer to a survey question ('yes' versus 'no'). This table can be used to construct three models predicting the survey response: 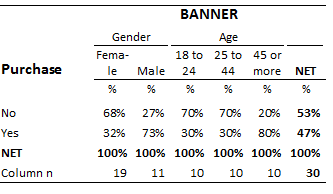 The AICs (defined below) for these models are:

As the lowest of these values is for age, the information criteria computed suggests that age is the best of the three models.

The most widely used information criteria for comparing Latent Class models is the Baysian Information Criterion[2] , which is usually referred to as the BIC. It is computed as:

where [math]\displaystyle{ n }[/math] is the sample size. Where the sample is size greater than 7 the BIC is a more stringent criterion than the AIC (i.e., all else being equal, it favors simpler models). An intuitive way to think about the difference between the AIC and the BIC is that the AIC is closer to the idea of testing significance at the 0.05 level of significance whereas the BIC is more akin to testing at the 0.001 level (this is just an intuitive explanation; these criteria do not correspond to these p-values).

Relationship to R² and the Adjusted-R²

The R² statistic used to compare regression models is proportional to the Log-Likelihood and thus comparing models using R² is equivalent to selecting them based on the fit to the data without regard to the model complexity (i.e., number of parameters). The Adjusted-R² statistic is similar in its basic goals to an information criteria (i.e., comparing based on fit and number of parameters), but information criteria are generally superior as:

Relation to p-values and statistical significance

In the case of the example presented above, an alternative strategy for comparing the models is to compute p-values. For example, with Pearson's [math]\displaystyle{ \chi^2 }[/math] Test of Independence, p = 0.04 for the gender model and 0.03 for the age model and thus we obtain the same conclusion as obtained from the AIC. Nevertheless, using the AIC is generally superior as: