Market researchers commonly use banner tables to show results that are broken down by several key pieces of information at the same time. For example, a banner table may display brand awareness across several demographics, like Age, Gender, and Region, so that all of those key breakdowns may be viewed at a glance.

Create a banner that can be structured in the object inspector.

In Displayr, a Banner is a special type of Variable Set which is used to bring together categories from many distinct Variable Sets. The banner is not fixed to a particular table - you can use and reuse the banner on as many tables as you like (as you would with any variable set).

The basic process for setting up banner tables in Displayr is:

How to create a new banner

To create a new Banner in Displayr:

How to lay out a banner

When you select the banner under Data Sets, the BANNER section will become available in the Object Inspector on the right-hand side of the window. This is where you can choose the layout of your banner.

Tip: If you create a table on your page (Insert > Table) and place the banner in either the Rows or Columns section under Inputs > DATA SOURCE in the Object Inspector, then you will be able to see the banner update in real time as you change the layout.

Many configurations of banners are possible, but there are two basic arrangements.

When more than two variable sets are used in a banner you may have many possible orientations.

Three additional settings are available for choosing the appearance of your banner:

In this example, the subnets and spans have been removed, leading to a more stream-lined table, and an overall NET has been included on the right-hand side. Note: the NET may be slightly different to an overall sample 'Total'. 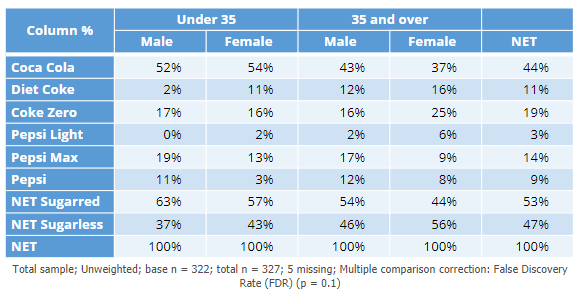 How to edit a banner

If you want to change the way your banner is arranged you can: